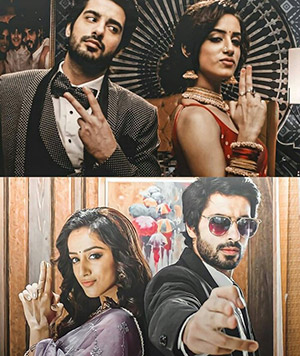 Preesha, a gynaecologist and rockstar Rudraksh get into an argument at their first meeting. Will destiny bring them together?

A secret from Preesha’s past is unveiled while Kaveri shoots a sharp accusation at Rudraksh. Later, Preesha is heartbroken when she learns about Yuvraj’s love interest.

Gopal Krishnan decides to publicly expose Rudraksh. While Raman and Ishita attend Yuvraj and Preesha’s engagement, the police arrive at the venue with a warrant.

While Gopal Krishnan refuses to apologise to Rudraksh, Ishita and Raman ask him to withdraw the case. Later, Preesha is shocked to learn about Saaransh’s disappearance.

Rudraksh comes across a shocking truth while the Shrinivasans gear up for Saaransh’s thread ceremony. Later, Preesha and Rudraksh face an awkward situation.

The Shrinivasans are surprised when Rudraksh performs the thread ceremony rituals with Saaransh. Later, Rudraksh embarks on a mission to impress Preesha.

Rudraksh impresses Preesha by giving her an award in the school contest. Later, Aahana hatches a cunning plan to get Saaransh out of the school.

Rudraksh attempts to impress Preesha after getting locked in the library while Yuvraj threatens Rajiv. Later, Rudraksh spends some quality time with his mother.

Preesha slaps Rudraksh and records her statement against him during the court proceedings. Later, he demands that she apologise to him.

Preesha faints during the court case. While Yuvraj receives some bad news, Rudraksh meets a dejected Saaransh at the school.

A dejected Rudraksh remembers his mother after singing a heartfelt song to console Saaransh. Later, Yuvraj learns a shocking fact about Rajiv.

Rudraksh asks for Mishika’s hand in marriage despite his wish while Yuvraj blackmails Rajeev. Elsewhere, the Shrinivasans fix Yuvraj and Preesha’s wedding.

Rajeev steals money from his father’s locker to catch the blackmailer. While Preesha unites Bubbles and Bunty, Rudraksh witnesses something strange about her.

A stunned Rudraksh learns that he is to get married to Mishika soon. Later, Balraj grows furious upon finding that his valuable diamond necklace has been stolen.

Preesha prepares for her mehndi ceremony while Rudraksh notices the stolen necklace on her. Later, Preesha’s mother faces extreme humiliation at the Khurana house.

Rudraksh saves Preesha’s mother from being publicly humiliated by Ahana. Later, Rajiv discovers an alarming truth on being confronted by Rudraksh.

Rajiv rushes to the hospital when Saaransh gets seriously injured. While Rudraksh plans to avoid his engagement, Rajiv learns a shocking fact.

Rajiv recalls his past with Mahima after overhearing Preesha’s conversation with the nurse. Later, Ahana is furious with Rajiv’s new decision.

Yuvraj hatches a cunning plan before his wedding while Rudraksh rehearses for his concert. Later, Yuvraj receives a precious gift from Preesha’s parents.

Rudraksh plans a birthday surprise for Rajiv while Yuvraj decides to kill the latter to save himself. Elsewhere, Preesha waits for Yuvraj at the Mandap.

While Preesha and her parents desperately hunt for Yuvraj, Rudraksh begins his concert. Elsewhere, Yuvraj rams his car into Rajiv.

The police arrest Preesha after she makes a shocking declaration. On the other hand, Rudraksh is furious to learn about Rajiv’s death.

Rudraksh gets violent at the police station as Preesha is interrogated. On the other hand, Yuvraj saves himself by lying to Preesha’s parents.

Saaransh is in tears as he is taken away from Preesha while Rudraksh is deep in sorrow. Later, Yuvraj misleads Gopalkrishnan about Rajiv’s accident.

Rudraksh is heartbroken by Rajiv’s demise while Saaransh sets out to help Preesha. Later, Rudraksh refuses to let his father touch Rajiv’s body.

While a concerned GPS berates Saaransh, Preesha breaks down after being tortured in prison. Elsewhere, Rudraksh sees some photos from the crime scene.

After Yuvraj’s shocking judgement, Preesha collapses in jail. Later, Vasudha arrives to tell Preesha that Saaransh has been kidnapped.

A heartbroken Rudraksh takes his anger out on Preesha. While she is in for a huge shock, he is stunned after reading a letter from Raman Bhalla.

Rudraksh is shocked to learn that Saaransh is Rajiv’s son while Preesha suspects foul play. Later, Rudraksh is overwhelmed by Saaransh’s innocent gesture.

Yuvraj lands in trouble when Preesha confronts him regarding his claims about Rajiv. Later, Preesha is devastated after she gets shocking news.

The police are impressed by Preesha’s heroic act while Rudraksh makes a promise to his dead brother. Later, Yuvraj asks Preesha to marry him.

Saaransh takes a big risk to meet Preesha inside the police station. While Yuvraj and Preesha’s wedding rituals commence, Rudraksh is found missing from his house.

Rudraksh and Preesha tie the knot. While a huge shock awaits Preesha, Yuvraj is flustered when his plan to acquire Saaransh’s legal right goes for a toss.

Rudraksh reveals his outrageous plan to Preesha while a furious Yuvraj vows revenge. In a shocking turn of events, Rudraksh suddenly proposes to Mishika as well.

An emotional Preesha recalls fond memories of Saaransh. Later, Saaransh bids goodbye to the Shrinivasans as he leaves with Rudraksh.

Rudraksh’s family is stunned when he arrives home with Saaransh. While devastating news awaits Yuvraj, Saaransh surprises Rudraksh with an unexpected move.

Saaransh plays a series of clever pranks on Rudraksh after spending the night with him. Upon learning a shocking fact, he decides to take matters into his own hands.

Saaransh plays a prank on Mishka as she prepares to get married to Rudraksh. Elsewhere, Preesha asks to hear Saaransh’s voice one last time before being hanged.

Saaransh causes trouble during Mishka and Rudraksh’s wedding ceremony. Elsewhere, Yuvraj is in a tough spot when Rajiv’s murder case is reopened.

Premiere episodes of My Desire air on Starlife from Monday to Sunday at 20h00.