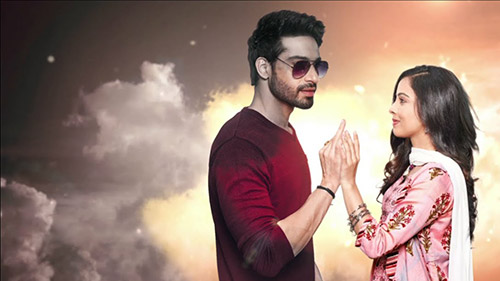 We are pleased to inform you about Unspoken Bond Teasers July 2022, read full details below

Darsh, a blind photographer, doesn’t let his visual disorder rule his life. While in Dwarka, he accidentally bumps into Nandini, a free-spirited girl. What’s next?

Darsh advises Nandini about the futility of materialistic things. Later, Rajvee prays to Gods for a devoted wife for Darsh.

When Vanlata threatens to cancel the marriage because of the dowry, Nandini agrees to go to Bansuri’s sasural as part of the dowry. Later, Darsh ends up in trouble!

During the party, Darsh faces humiliation and announces his decision about marriage. Later he crosses paths with Nandini and saves her from an accident.

Darsh is overwhelmed by the family’s efforts to make him feel normal. Elsewhere, Nandini goes to sleep on an empty stomach.

An infuriated Naveen vents his anger out on Nandini and Bansuri when Gunjan misbehaves with the guests. Later, Darsh recognises Nandini’s voice.

While Gunn lies to Nandini and goes to meet her lover, the latter finds her and tries to take her home. Later, Gunn lands in trouble when Nandini’s lover chases her.

When Rajvee finds out about the anklet, she goes to find the owner of the anklet for Darsh. Later, Rajvee crosses paths with Nandini and takes a liking to her.

Rajvee’s prospective brides for Darsh run away when he asks them questions. While Rajvee’s big announcement stuns Darsh, he thinks of Nandini.

Nandini’s kindness impresses Darsh when she helps him carry some load. While the family is busy in the ceremony, Nandini helps Shobhit avoid a disaster.

Darsh confronts Rajvee about her challenge. Later, Rajvee faces the heat when they find out that Tosha and her family have lied to them.

When Rajvee is insulted, Darsh takes a reckless decision to marry Tosha. Later, Tosha’s truth is revealed before all.

When Rajvee accuses Nandini of plotting against Darsh, she keeps quiet to protect Gunn. Later, when Naveen tries to abuse Bansuri, Nandini takes a strong stand.

Rajvee is glad to accept Nirali as her daughter-in-law and invites her to meet Darsh. However, Nirali makes a strange appeal before Darsh. Will Darsh accept her?

Nandini offers her help to Rajvee by fixing the punctured tyre. On the other hand, Darsh secretly helps the villagers.

Rajvee insults Nandini for accusing Darsh of stealing her cow. In a fit of rage, Nandini confronts him and is shocked to learn about his blindness.

Nandini is overcome with guilt upon learning about Darsh’s blindness and apologises to him. Later, Rajvee offers her money to leave Dwarka.

Darsh’s mother convinces him to come for the Holi party, hosted by her. However, at the celebration, he remembers his past and feels dejected.

Nandini lifts Darsh’s spirit and reintroduces him to the colours. While he enjoys Holi with his family, Nandini learns Nirali’s secret.

Darsh reveals the truth to Nandini about helping a desperate Nirali. Later, he saves a disguised Nandini from getting exposed.

On learning that Nandini performed the ritual instead of Nirali, Rajvee goes to confront her. Later, she finds out Niralis truth and panics.

Nandini saves Rajvee when she suffers from a panic attack after getting locked in the storeroom. Darsh expresses his gratitude to Nandini for saving Rajvee’s life.

Darsh runs into his ex-flame who makes him feel like a burden when Nandini steps in and makes him feel special. Later, he falls in love with Nandini.

Darsh reveals about his feelings for Nandini to Shobhit. Meanwhile, Rajvee objects after Shobhit spills a grave truth about Darsh to her.

Darsh confronts Mrs. Patel and Nandini in a car and threatens to kill them. Eventually, Mrs. Patel reveals the truth.

When Nandini calls Darsh to ask why he protected her, Darsh confesses that she is special to him. Later, Rajvee goes to Vanlata to seek Nandini’s hand for Darsh.

Naveen finds that Vanlata was the culprit behind Tosha’s incident and loses his cool. As Nandini praises Darsh, he misreads her words.

While Shobhit celebrates his birthday, Rajvee reveals that Darsh and Nandini can get married only if Shobhit agrees to wed Gunn. What will he decide?

Vanlata informs the family about Darsh and Nandini’s marriage but the latter doesn’t believe herself to be worthy. On the other hand, Shobhit lies to his father.

When Nandini’s stalker plays an evil prank on Darsh, she rushes to his rescue. Later, Darsh and Nandini engage in an emotional conversation.

In order to fulfil Nandini’s filmy wish, Darsh elopes with her. However, at the registrar office, they come across a shocking situation.

When Mohan tries to attack Darsh for marrying Nandini, Gunn manipulates him with a bribe. Later, Darsh attempts to tell Nirali the truth about Rakla.

Nandini comes to visit Darsh at his place and they end up sharing a romantic time. Further, she saves him from disgrace with a thoughtful act.

Gunn behaves outrageously at the Rawal mansion while Nandini becomes the epitome of poise. Later, Darsh and Nandini set out for a special date.

kindly check back for Unspoken Bond Teasers July 2022, we will soon update this page